In 1989, Kevin Costner starred in a movie called Field of Dreams, where Costner was a farmer who heard voices that inspired him with a “crazy idea” to turn his cornfield into a baseball field. The voice said “if you build it they will come”. In my book Nail It Then Scale It – For The Entrepreneur, I called this out as one of the entrepreneurial fantasies that just building something doesn’t mean people will show up, unless you are Kevin Costner (or have a miracle). I now need to add a new chapter to my book that sometimes miracles do happen, because we had a “Field of Dreams” moment last week. The farmer in this story was our new friend Roger Muir. The voices he heard were ours that convinced him of a crazy idea to cut down his straw field in Rexburg, Idaho and turn it into a campground so people from all over the world could show up and watch the Solar Eclipse.

As the Eclipse Camp team arrived in Idaho on Friday to mark off the field and turn it into dozens of campsites, they only had pre-sold 45 campsites. They were more than 45 campsites short of breaking even. The team now had to sell more campsites in three days than they had sold in the prior two months, in order to make their summer project fundraiser for Jenny’s Myeloma Crowd foundation a success.

Shortly after showing up on Friday, a truck pulled up with a large camper trailer and said they were told by Walmart across the street that we had campsites for sale– Yeah! We had walk-in customer #1. As I looked at our this lonely trailer sitting in a massive 25 acre field with $12,000 of porta potties clustered every 200 yards, I had this sick feeling that we had made a huge mistake. An hour later as another RV pulled up, a reporter from the local paper walked up and started asking questions as to what we were doing here. The reporter grilled the potential customer #2 as to “why would they want to pay to park their RV in a big empty straw field.” The potential customer looked confused as to why this person with a recording device was asking these questions — The sick feeling in my stomach started to get worse. 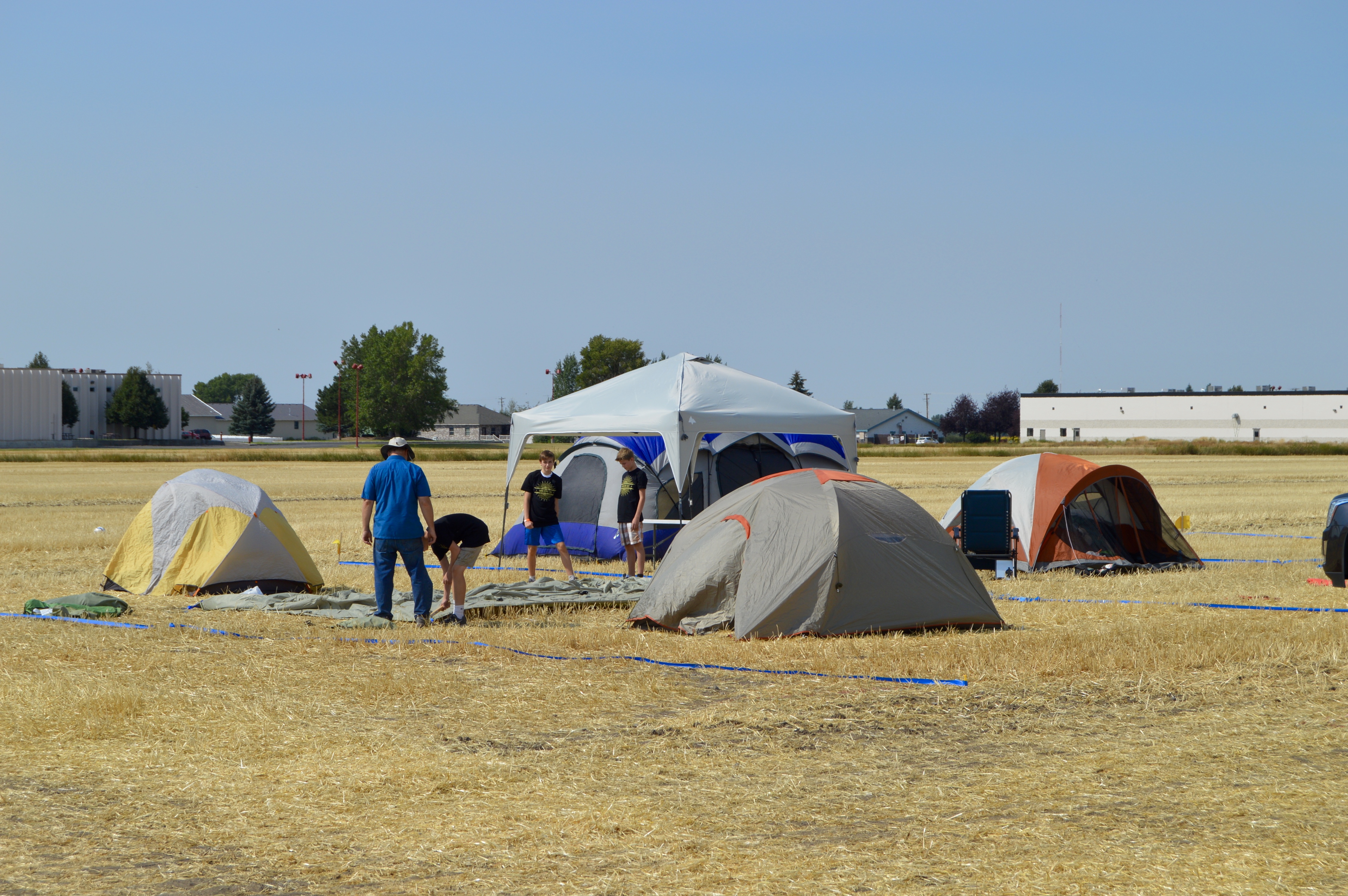 As we surveyed the huge empty field on Friday night, the questions in our heads started coming:
– Had we picked the right location?
– If we had only sold 45 campsites, how were we going to sell more than twice that amount in three days?
– Why would anyone drive to Rexburg for the Eclipse without having a place to stay?
– Even if we had walkup customers during the weekend, would they pay $200 for a tent site or $250 for and RV site to camp in a “straw field”?
– What were we thinking?

Each of the team members offered up silent prayers and then got to work. We visited the Walmart across the street and thanked the managers, service desk and security guard for sending customers our way. Walmart has a policy of letting RVs spend the night in their parking lot, but due to the expected heavy traffic of the eclipse weekend, they suspended this policy and had to kick any overnight RVs out of their parking lot. The team set up a huge banner in the end of the field, set up many directional street signs that they placed across from Walmart and along the street. They updated their google SEO key words, added a few more AirBnB listings, pumped the ad spend on Facebook and then sat back to see if it was going to work. 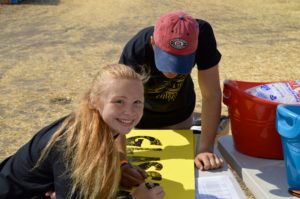 By Saturday the camp started to fill up with about 60 campsites by early afternoon. We found many people who chose to stay at our camp over others because we were donating to cancer research. Jenny had the chance to talk with several cancer survivors. At 5:30 p.m. that evening, a KSL TV truck drove up and asked if they could interview Jenny for their 10 p.m. evening news. I asked the KSL reporter, Andrew Adams, how he heard about the Eclipse Camp fundraiser. He saw our blog on Facebook and was very interested in how we were going to turn the solar eclipse into a cancer research fundraiser. About an hour after Andrew had interviewed Jenny and the kids, the KSL Satellite TV truck rolled up and Andrew said they were going to do the live 10 p.m. news shot from the Eclipse Camp. The KSL news story was one of several miracles that weekend. https://www.ksl.com/?sid=45487396&nid=148

By Sunday morning the KSL story was in the top 5 most viewed stories on KSL.com and we were getting emails, phone calls and Facebook messages from friends across the United States.

By Sunday afternoon it was a scene out of “Field of Dreams.” Car after car, RV after RV started lining up on the street and a steady line of vehicles started pulling into the eclipse camp looking for a place to set up their tent or park their RV and join us to watch the eclipse on Monday. They had been sent by Walmart across the street, or they had seen the KSL story, or they had heard about it on social media from a friend, or they were just driving by. The Eclipse Camp team of Clark, Josh, Megan and Allyse stayed up in shifts throughout the entire evening and early morning checking in campers. By Monday morning when I awoke, there were three rows of RVs and tents from one end of the field to the other. I drove across the field in the Razor 4 wheeler and counted the hundreds of cars and RVs and said prayer of gratitude for the miracle.

I came back and told my nephew Josh that this was a total miracle. And he said, “No it wasn’t Uncle Paul, I prayed.” Josh has received his mission call to Guadalajara, Mexico and leaves this October- he is going to be an awesome missionary!

Prior to setting up the Eclipse Camp 2017 fundraiser Jenny had raised $477,000 towards her goal of $500,000 for myeloma cancer research. Over the years Jenny has volunteered her time and not received any salary or compensation. The donated office space and volunteers meant that 100% of any donations she raised has gone directly to cancer research.

After the expense of the porta potties and rental of the farmer’s field, the Myeloma Crowd has now raised a total of $494,900. Thanks to the Eclipse Camp team, Jenny is now only $5,100 short of reaching her commitment and goal of raising $500,000 to fund the two MCRI cancer research projects. https://www.myelomacrowd.org/mcri/

Those who attended Eclipse Camp 2017 commented on how organized and enjoyable the event was. We hosted an outdoor movie “Galaxy Quest” on Saturday night which was a big hit. The guests appreciated the small details like our hand washing station, this his and hers hair washing stations and the pancake breakfast Monday morning. Group after group told us how nice their experience was and that we had thought of everything. They appreciated the kind and diligent team that greeted them set up their tents, had extra sleeping bags, hammers and helped answer questions.

Monday morning’s eclipse was the spectacular highlight to the weekend. The wonder and shouts of joy was real as campers got to share the magnificent experience with their families and newfound friends. In the line of totality, we saw a 360 degree sunset as the skies grew dark, the temperature dropped, the stars came out and the streetlights came on. The planning was worth the moment. 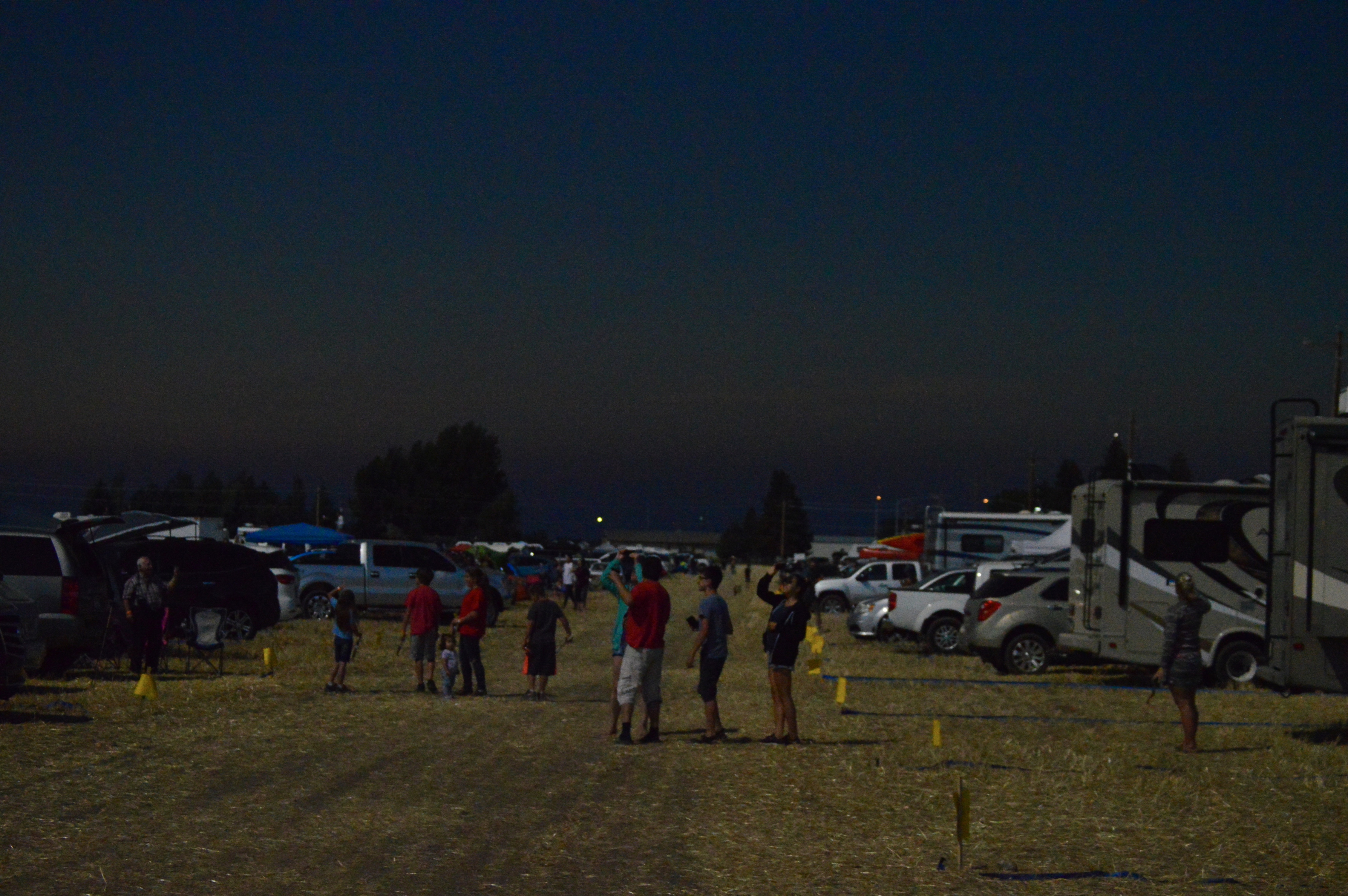 A huge thank you goes out to everyone that participated and helped promote this event.

About the Author: Jenny

Nail It Then Scale It on Amazon